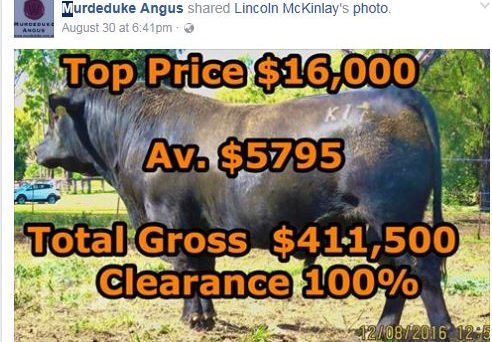 A complete clearance, a market top of $16,000 and bottom line average of $5794 were the standouts at Tuesday’s annual Murdeduke Angus Sale, CQLX, Gracemere.

The Winchelsea, Victorian based operation, saw bulls sell to all parts of central Queensland for interstate for owners, the Wilson family.

Landmark Rockhampton acting for an undisclosed buyer accounted for 20 head (28 percent of the offering) topping ay $7500 to average $5300. Top of their selections at $7500 was a 24-month-old by Milwillah Gatsby. Another feature of the offering were 18 sons (25 percent of the catalogue) of the prefixes leading sire, the $91,000 Te Mania Emperor. These found favour with buyers with his progeny taking top and second top sale honours to end with a $6722 sale average, $928 per head above the sale medium.

Busby Cattle Company, Yarwun selected six to average them $5000 topping at $7000 while the success of last year’s selection prompted Yeppon cattle producer Malvern Developments to sign off on another nine bulls this year for an average of $3944.

The Pensini Grazing Company, Cameron Downs, Hughenden acting through Shane Stafford Stock and Cattle, Richmond took four to average them $5875 topping at $7000. Darryl Ahern, Rosedale, Baralaba outlaid $7000 for an Equator son while Allen Pastoral, Oakvale, Mitchell picked up a pair to average them $4000.